…With Your Hood All On 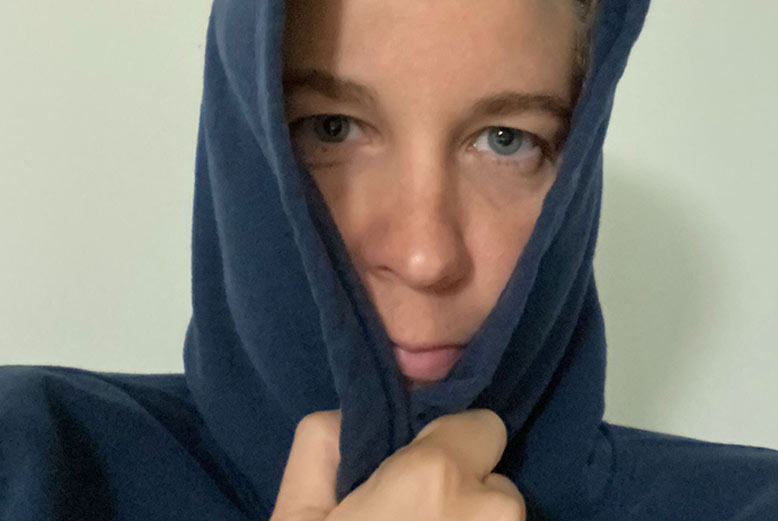 …With Your Hood All On

You ever wear a hoodie? Yeah, me too.

When I was in middle school, I wanted a hoodie so bad. I didn’t have any, and I knew friends who had multiple. They were expensive, though, and I always spent all of my money on candy. I had regular sweatshirts galore, most of them hand-me-downs from my older sister, or acquired from “rag bags,” which were garbage bags of clothes we would get from other families that were cleaning out closets. For some reason, hoodies never made the “let’s get rid of this” pile.

Finally, in eighth grade, my basketball team got together and decided we needed matching team hoodies, so I scrounged up the $44 and the order was placed. I wanted to wear that thing everywhere. It was so comfortable. I could put my hood on and pull the strings really tight, until I could just barely see. I could put both my hands in the front pouch and pretend like I was wearing a muff. (I always wanted a muff…still want one, I guess. It just seems like a cool/weird accessory that is so much more interesting than the glittens I currently own. (Yep, made up a word: I have mittens that are gloves on the inside. Tricky! Like toe socks that when you look at them just look like regular socks.) I majorly digress.)

Over the years, I’ve acquired many hoodies.

Some really baggy, some more fitted. Some extremely soft on the inside, some with tight necks, some with missing hood strings, some that zip up the front, one with a stylized picture of Little Red Riding Hood and the Wolf on the back.

When TJ and I lived in California, we would take the dogs for a walk every day before work, and every evening after work. We lived on an old decommissioned military base called Fort Ord, which still has housing for active-duty military and government civilians. We had a couple of different routes for walking the dogs: the short, the long, the short-long, the reverse short-long, and the church. Usually we would walk the dogs together, but sometimes TJ would take them both by himself.

One such evening, it was just getting dark; he grabbed his hooded sweatshirt and took the dogs on the church walk. The wind was chilly that day, so he put his hood on. As he rounded the corner of the church, he noticed something unusual. He could see a computer screen through one of the windows, the blue light shining brightly. As he is in IT, and this was a military base, the thought went through his mind that someone should really turn their desk around, because if you’re working on a computer with the screen facing the window, there could be sensitive information on it that someone walking past might see.

Then he saw a man. He had seen him before. The man started walking his way. TJ watched him warily, holding onto the dog’s leashes.

“I wouldn’t come any closer,” he warned the man. He often has to caution people not to approach. Bobo and Zuzu are very well-trained but they are 90 and 130 pounds respectively, and anything could set them off.

The man said, “What are you doing here?” Accusingly. Aggressively.

“Why were you snooping in the window?”

“I wasn’t snooping in the window.” Guarded now.

“Then why you walking around with your hood all on?” Like that was all the incriminating evidence he needed.

“I’m going to call Mike and report you.”

“Creeping around here and looking in the windows. Trespassing.”

“Man, listen, I’m a government employee. I live just around the corner. I walk my dogs here all the time.”

The man got his phone out, and TJ heard him talking to someone. “There’s a suspicious African American man snooping around the church. He says he’s a government employee, but I don’t believe him.”

TJ didn’t wait to find out what would happen next. He left, hood still “all on,” fuming, that he couldn’t walk his dogs on a cold day without getting accused of unlawful behavior.

Being a black man walking his dogs on a cold day wearing a hoodie. So risky.

As TJ walked around the corner, nearing our home, he looked behind him and saw that the man from the church was following him in his vehicle. TJ took out his cellphone and began recording. Once he noticed that TJ was recording him, he continued to drive past him.

TJ went into the house to put the dogs inside and then went BACK outside to see if the man would drive by again. He never did.

It seems that EVEN the post Chaplain, who happened to be a LT COL, can exhibit racist behavior.

Anyone should be able to walk their dogs or take their dogs to the park and just enjoy themselves.