In Celebration of Saunas and Dreadlocs

Home » Blog » In Celebration of Saunas and Dreadlocs 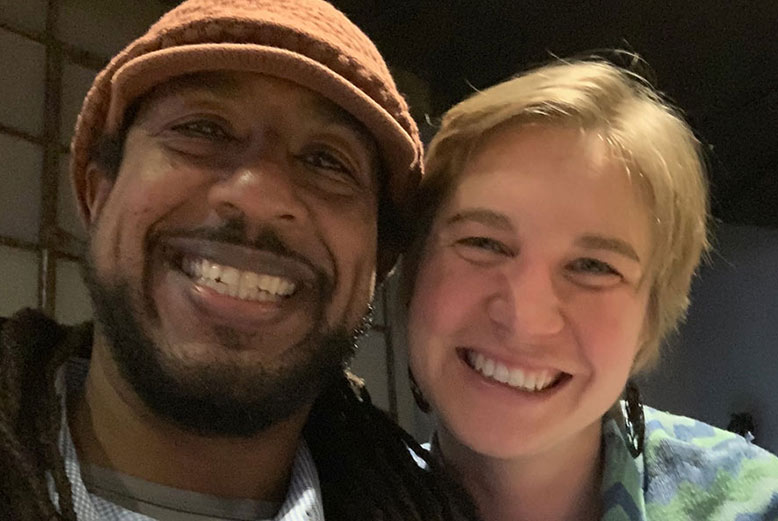 In Celebration of Saunas and Dreadlocs

TJ and I are an interracial couple. On the surface, he is black and I am white. But the cultural part beyond race is much more fascinating. He can tell you more about himself later, but I’ll start here: He is what he refers to as a “Head,” as in “Hip Hop Head.” He knows everything (this is no exaggeration) about hip hop. He can talk for hours about the five pillars of hip hop, and answer any question from how it started, how it evolved, who was big when, the rivalries that started and why, who was new to the scene and how they blew up, the lyrics to all the songs from the 70s, 80s, and 90s, and how one song from one artist is a response to a different song from another artist, and on and on and on. He grew up with music as a big influence in his life.

Hip hop speaks to the struggles of life in the streets. It asks big questions about life and right and wrong. It is raw and emotional and perceptive. I didn’t know much about it before, but after really listening—“taking it to the lab”—and talking about it with him, I understand it a little better.

TJ has continued to watch every documentary and interview that comes out. When we are watching one of them together, he’ll pause the show and tell me the backstory about the story, and then we’ll continue watching, and the narrator will recount the exact same story he just told me, and then he’ll pause again and tell me a few more details with a big-ass grin on his face.

His dreadlocs, like hip hop, are a huge part of who he is. He’s been growing them for over 10 years, and to him they are more than a hairstyle. They are a symbol of his origin, his history, his culture, and his pride in being who he is. Again, he can tell you more, but the reason I bring this up is because we think it’s important to acknowledge and celebrate our differences, and that is the beginning of our decision to create “Saunas and Dreadlocs,” a celebration and melding of cultures and creativity.

In contrast to TJ, I am, um, not just “not a Head,” I am not really a person who knows anything about music beyond the country music I used to listen to on the radio in middle school and high school. It’s weird, because I used to play the violin, the clarinet, the guitar, the mandolin, and would consider myself a “musical” person, but my knowledge of music culture beyond the little ditties I would plunk on my guitar or the small-town classical concerts that I would go to with my grandma is extremely small. Not just small by comparison to TJ—because I literally don’t know a single other person who knows as much about a genre of music as him—but small by any standard. I know the names of some artists, but wouldn’t be able to recognize them in a picture, much less if they pass me on the street. I can’t connect the titles of songs to who sings them, I rarely know all the lyrics, and I have only been to a handful of concerts in my life—and none that I was all fan-girl about. My mind is open to music and I appreciate it, but it was not a major factor in my life.

It seems boring when I try to describe my life through music. The part about me that people do find intriguing is my family background and our connection to our Finnish roots. All of my great-grandparents migrated to the US from Finland. Our ancestors came from northern Finland and Sweden, from the Sami people, who were (and still are) reindeer herders and seen by people in the south as “backwards,” and “slow,” and thus discriminated against. More about them in a later post. We never really talked about this and it’s a history I am just now learning in my adulthood.

We grew up in a religious community, also with Finnish roots, where many families were big. I have 14 brothers and sisters, which always comes as a shock to people. It was normal to us and to those around us. There were always siblings or cousins to play with, and plenty of commotion. On Saturday mornings, my mom and dad would sometimes make batches of pancakes—using a large frying pan across two burners, another frying pan, and the large electric griddle—which we could eat to our hearts’ content. On special occasions, we would have pannukakku (BUN’-uh-guck’-ooh) for breakfast, something that is described as a “Finnish Oven Pancake,” but that never seemed like an apt description to me. It’s much more delicious, made of lots of eggs and milk and butter and sugar and cooked in the oven until it puffs up over the top of the pan.

Pannukakku is one Finnish influence that is still a big part of my life, and to which TJ is also now privy. (He calls it “Goony-goo-goo,” which is easier to pronounce.) Another is the dousus (DUH-sooz) that we wear on our feet around the house, and another is the gunda (GUN-da) that’s always left in the bag of bread because no one wants to eat it.

But the most important part of growing up in a Finnish household was the sauna. The first and most crucial step is getting the pronunciation right. Say the word “chow.” Now instead of “ch” put an “s”— “Sow.” Sow-na. Sauna. (If you ever want to annoy a Finnish person, say it like “law-na,” “saw-na.” Ugh!) We had an electric sow-na in the basement of our house. Every night, we would turn the sauna on and then take saunas in shifts—even though we sauna’d by gender, we had too many people to fit at one time. We had a sauna at our cabin on the lake (the “camp”), and all summer long we would take a sauna and then jump in the lake, known as “sauna-swim.” We would go visiting at our friends’ houses and part of the visit would involve taking a sauna at their house. “We’re going to Torola’s for sauna tonight.”

Just as dreadlocs are part of who TJ is, the sauna is part of who I am. Two unique pieces of our lives that we bring to our creativity in the wood shop, and that we want to share with you, the TAZ Crew.

As we expand this part our business, making one-of-a-kind functional art for your home (and sauna!), we also invite you to contribute to this creative corner. We are looking for other artisans who have hand-crafted, inspiring, and culture-related items to sell in our online store. If that’s you, please reach out. We’d love for you to be an inaugural contributor to “Saunas and Dreadlocs.”

Guantanamo Bay, Cuba. We ship anywhere in the world.